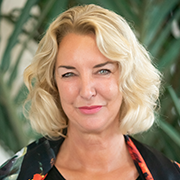 Prof. Karen Sliwa is a senior cardiologist working at the Division of Cardiology, Department of Medicine, Groote Schuur Hospital, University of Cape Town and at UCT Private Academic Hospital. Her special areas of expertise are heart failure, structural heart diseases such as cardiomyopathy and cardiac disease in pregnancy.

She is also Director of the Cape Heart Institute, Faculty of Health Sciences, University of Cape Town.

Prof. Sliwa is widely recognised as a world expert in cardiovascular diseases (CVDs), with a special interest in reducing morbidity and mortality in women with cardiac disease in maternity. She has contributed to better understanding on the pathophysiology, treatment options and awareness of peripartum cardiomyopathy (PPCM), a global disease particularly prevalent in African populations.

She led and still leads several inter-Africa and global cardiovascular research projects, which have had a major impact for creating knowledge about CVDs common in Africa and other Middle-to-Lower income regions, leading to changes in policy. Her considerable experience in setting up simple, cost-effective registries and web-based data entry platforms have had a major impact on planning several innovative research projects and has facilitated the training of physicians from several African countries, including Mozambique, Nigeria, Cameroon, Uganda and Tanzania. Her translational research from bench-bed-to-population studies have led to a much better understanding of CVDs such as rheumatic heart disease and heart failure due to various causes and subsequently improved patient care.

Professor Sliwa leads several high-profile special interest groups including a dedicated EORP Working Group on PPCM of the Heart Failure Association of European Society of Cardiology. Over her distinguished career she has served in many notable roles, including chair of the South African Heart Failure Association ( HeFSSA), President of the South African Heart Association (2014-2016),  President of the World Heart Federation (2019-2020) and currently being a Board member of the Pan African Society of Cardiology ( 2021-2025).