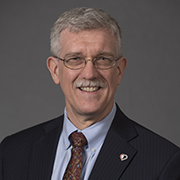 John R. Teerlink, MD, FHFSA is Director of Heart Failure and of the Echocardiography Laboratory at the San Francisco Veterans Affairs Medical Center in San Francisco, California. He graduated from Swarthmore College with Highest Honors in Comparative Religious Studies and Cellular Biology. After receiving his medical degree from Harvard Medical School, where he performed a year of research in the laboratory of Drs. Janice and Marc Pfeffer, he completed an internal medicine residency at the University of California San Francisco (UCSF). He continued his basic science training through a post-doctoral research fellowship at Hoffman-LaRoche in Basel, Switzerland with Drs. Martine and Jean-Paul Clozel. Dr. Teerlink completed his cardiovascular medicine fellowship and a Howard Hughes post-doctoral research fellowship at UCSF, subsequently joining the faculty, where he currently is a Professor of Clinical Medicine.

Dr. Teerlink has been an active member of the Heart Failure Society of America, serving on many committees including the Membership, Scientific Program, Corporate Affairs, Development, Lifetime Achievement Award and Guideline Committees and currently serves as Secretary and on the Board of Directors and the Executive Council. He also currently serves on the Acute Heart Failure Committee of the European Society of Cardiology Heart Failure Association and has served on the National Committee on Heart Failure and Transplantation of the American Heart Association. He is a founding and charter member of the American Association of Heart Failure Nurses. Dr. Teerlink completed a four-year term as a permanent member of the United States Food and Drug Administration (FDA) Cardiovascular and Renal Drugs Advisory Committee, and frequently serves as an ad hoc member of multiple other FDA advisory committees and panels for medical devices, diagnostics, biologics and drugs. He is a member of the joint FDA/ Duke University Standardized Data Collection for Cardiovascular Clinical Trials Initiative to develop standardized definitions for cardiovascular endpoints. He was an Associate Editor for the Journal of Cardiac Failure, is currently the Guest Editor-in-Chief for JACC: Heart Failure, and is a clinical scholar presenting many lectures and publications, including a chapter on Acute Heart Failure in Braunwald’s Heart Disease textbook. He was profiled in The Lancet as an internationally recognized leader in heart failure.