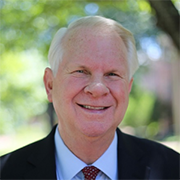 Dr. Patterson is Professor of Pharmacy and chair in the Division of Pharmacotherapy and Experimental Therapeutics at the University of North Carolina Eshelman School of Pharmacy. He also holds an appointment as Research Professor of Medicine in the Division of Cardiology at the University of North Carolina at Chapel Hill. In 2018 he was appointed as the Director of the Bill and Karen Campbell Faculty Mentoring Program in the Eshelman School of Pharmacy.

Dr. Patterson received his B.S. and Pharm.D. degrees from the University of Tennessee Center for the Health Sciences. After completing a residency in the City of Memphis Hospital, he joined the UNC Chapel Hill faculty in 1981. Throughout his career at Chapel Hill, his research, teaching and clinical activities have been dedicated to optimizing the pharmacotherapy of heart failure. He is especially interested in precision dosing of cardiovascular drugs using pharmacometrics, biomarkers and pharmacogenomics. He has served as an investigator on more than 100 heart failure clinical trials, and has authored or co-authored over 120 publications. Dr. Patterson has trained more than twenty fellows and graduate students.