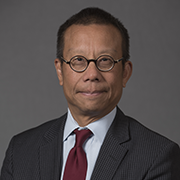 Officer Board of Directors
Board Member

Dr. Fang graduated summa cum laude from Duke University in chemistry and mathematics and Duke University School of Medicine. He completed his internal medicine residency and chief residency at the Johns Hopkins Hospital and completed fellowships in both Cardiovascular Medicine and Advanced Heart Failure/Transplant Cardiology at the Brigham and Women’s Hospital by 1997. He served on the faculty of the Brigham and Women’s Hospital/Harvard Medical School between 1997 and 2006 where he was Associate Professor of Medicine, Director of the Cardiovascular Fellowship Training Program, and Medical Director of Heart Transplantation and Circulatory Assistance. In August of 2006, he moved to University Hospitals Case Medical Center where he was Professor of Medicine, Associate Chief for Clinical Affairs, and the Medical Director of the Heart Failure, Transplant, and Mechanical Circulatory Support program. In April of 2013, he moved to Utah to become the Chief of the Cardiovascular Medicine Division at the University of Utah School of Medicine. He holds the John and June B. Hartman Presidential Endowed Chair in Cardiovascular Medicine and also serves as the Executive Director of the Cardiovascular Service Line for the University of Utah Hospitals and Clinics.

Dr. Fang has won multiple awards for his teaching at the local and national levels and is regularly listed in the Best Doctors in America. He has been the recipient of the Brigham and Women’s Eugene Braunwald Fellowship Teaching Award (three times), the American College of Cardiology’s W. Proctor Harvey’s Teaching Award, the American Heart Association Laennec Master Clinician Award, and named the Irving B. and Virginia Spitz Master Clinician in Cardiology at University Hospital Case Medical Center. His academic interests include coronary artery disease of the transplanted heart, heart failure with preserved ejection fraction, sleep disturbances in heart failure, and ventricular assist devices. His published work includes book chapters in major CV textbooks as well as original research and reviews in the field of heart transplantation and heart failure in such journals as The Lancet, American Journal of Cardiology, Circulation, Journal of American College of Cardiology, and Journal of Heart and Lung Transplantation. He has been an invited editorialist for the New England Journal of Medicine, Circulation, Circulation Research, and the Journal of American College of Cardiology, JACC-HF, and Journal of Cardiac Failure. He serves on various national committees including the HFSA heart failure guideline and board review committees, the AHA/ACC STEMI guideline writing group, and the DSMB for the NIH Cardiac Surgery Network. His heart failure sections at both the University Hospitals Case Medical Center and the University of Utah have been part of the NIH Heart Failure Clinical Trials Consortium. The University of Utah heart failure group was recently awarded one of four AHA HF network four-year grants. In 2014, he was elected to the Association of University Cardiologists. He most recently served as one of the primary chairs for the planning committee of the HFSA 2017 Annual Scientific Sessions. He is currently the Deputy Editor to Circulation Heart Failure.